This is an introduction to our series of posts to be published in our “equations and shapes” category. In this series we post articles explaining the relations between equations and the shapes they define.

We will start by understanding very simple curves, and later advance to more interesting curves and surfaces. You will read about the famous cubic surfaces first studied in the 19th century, and you will even be able to learn about so-called world record surfaces such as Barth’s famous sextic.

Figure: A 3d-printed smoothed version of the famous Barth sextic world record surface, created by Oliver Labs. In this category of posts, you will read about how to create equations for surface such as this one.

This series of posts will focus on the following topics:

And questions around this, such as:

History of this category of posts

I am finally starting this series of posts around equations and shapes… a project I have been wanting to work on since my first advent calendar on beautiful algebraic surfaces in 2002, showing 24 images I created using the computer software “surf” (through my front-end “surfex”). That calendar showed beautiful surfaces, but the explanations were far too short.

This was long before our 2006 advent calendar (together with Hans-Christian Graf v. Bothmer) on geometrical animations – which was a large step forward because for each of the 24 days, we did not only create an image, but a mathematical animation.

In december 2007, I went one step forward again. For the imaginary 2008 project, I created several interactive visualizations within the computer software “surfer”, the first version of which was essentially an easier-to-use and nicer-to-look version of my software “surfex” from 2001. Besides entereing equations, the users were able to manipulate surfaces by changing certain parameters which I placed carefully into the equations in order to allow for interesting deformations of the original surfaces, such as the Barth world record sextic surface, to give an example.

I am starting this new series of posts in the month of December again, but this time, the project is intended to last much longer. On the other hand, I will, of course, not be able to publish one post per day, so the frequency is much lower than with first two projects mentioned above. Technically, this is yet another step forward now, the main advantage being that the interactivity now happens within the browser, so that no software has to be installed to experience the fascinating mathematics; it works even on smart phones and tablet computers thanks to the software CindyJS.

But this technical improvement is not the main aspect. More importantly, this format of posts finally gives the space and opportunity to explain enough details for each and every topic I want to speak about. Long ago, in 2002, I had intended to create a series of explanatory web pages, but this format of a blog is much better suited to the fact that one article will be written after the other; and CindyJS is a tool existing only since about 2016 and giving me the necessary technical background to create most of the illustrations. 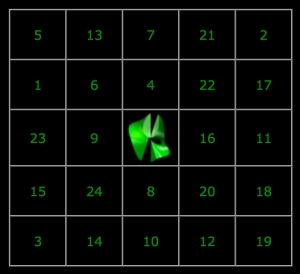 Figure: A screenshot of my 2002 advent calendar of algebraic surfaces.

This series of posts uses our own software cwp to visualize curves with parameters. It is based on the javascript library CindyJS and it is currently actually not much more than an adaption of a CindyJS example, but may grow over time if I realize I need more features while creating this blog. See Math-Sculpture.com/cwp for details.

Other widgets are created using pure javascript/CindyJS programming, without using our cwp app, but sometimes using CindyJS plugins such as Cindy3d or CindyGL.